Some people have stairs leading to their attic. Some people don’t even have an attic. Then there are some people, like my parents, who had a ladder leading up to the attic.

The attic; a strange, foreign land of trinkets from years past, balls of tangled Christmas lights, and deadly creatures. My childhood fascination with such a space overwhelmed me. In the rare moments when the attic door was opened and the ladder would reveal itself, my insides tingled anxiously. It was as if I was staring into the vast reaches of outer space; the universe in all its complexity and mystery lay just beyond the top of the ladder. Green slime oozed from the edges of the attic, surely an indication of some other-worldly experience. 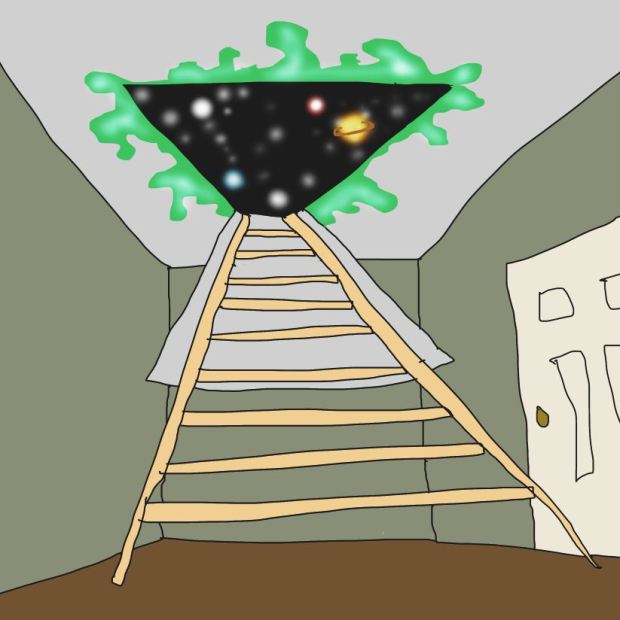 I was enamored with the attic. It was terrifying and amazing; it was terrifazing. Amazifying? Whatever. My youthful spirit longed to know of its secrets. 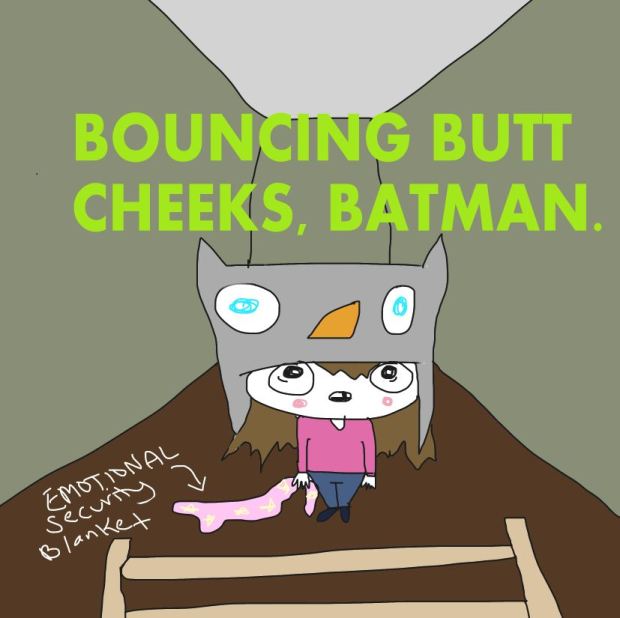 Soon enough, that fated day arrived when I would experience the attic. Dad needed to retrieve something in a box up there, and I saw my golden opportunity. This is it, I thought to myself, this is your moment.

With my emotional security blanket (which I named Star) tied firmly around my neck like a cape, I began to ascend the ladder.

How I thought it was: 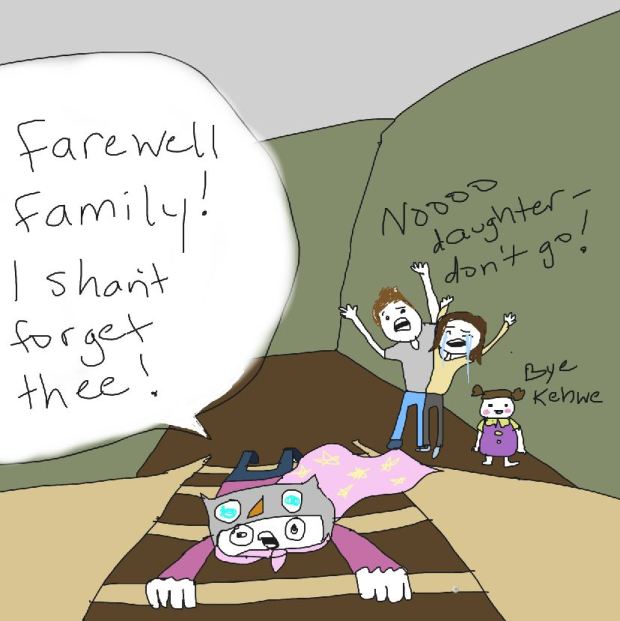 How it really was: 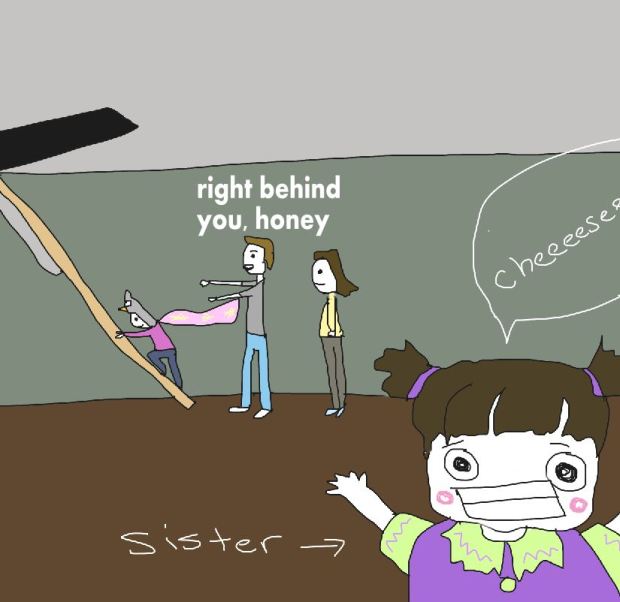 As the wind began to pick up, I tightened Star around me and secured my grip on the ladder. Nearly at the top, there was no telling what awaited me. The anticipation was overwhelming. 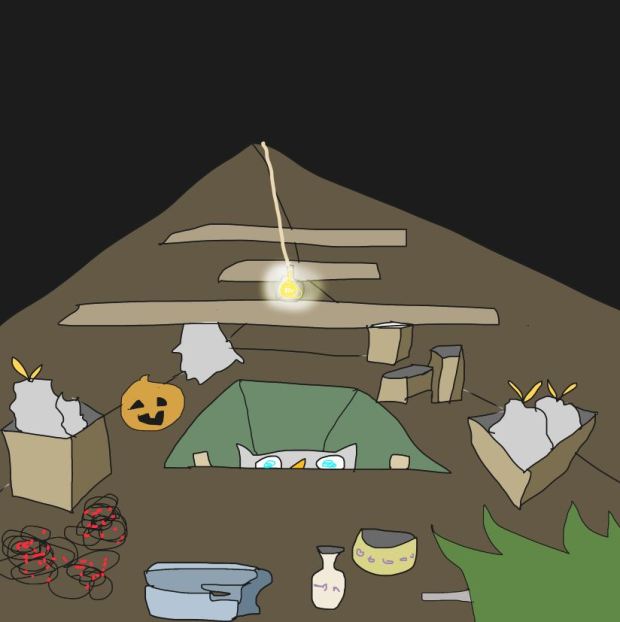 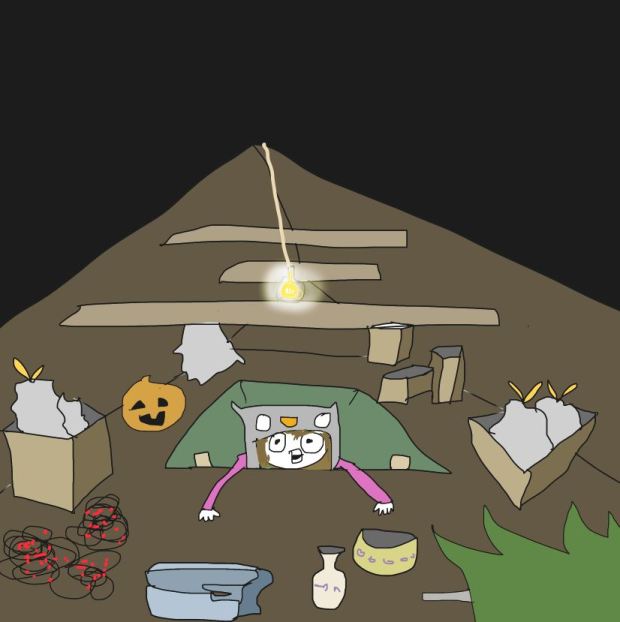 Alas! I had reached the surface to discover a world of boxes filled with junk I didn’t really care about, yet I was overjoyed to explore this new, vast wilderness. 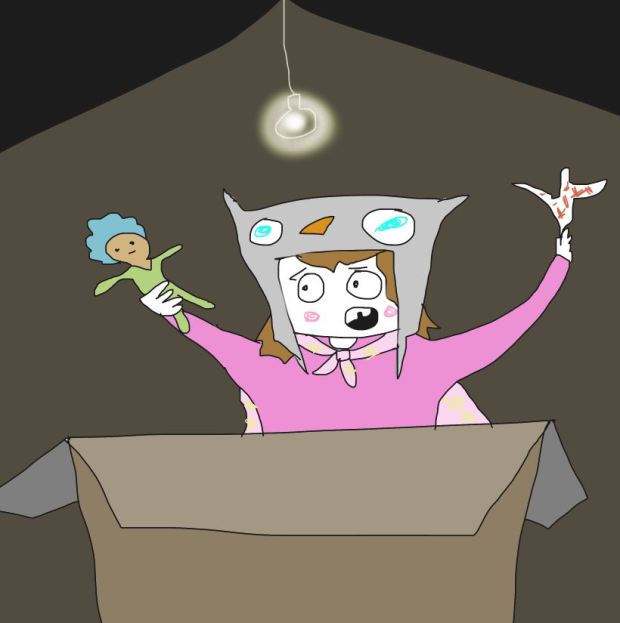 After what seemed like only a few minutes (probably because it only was a few minutes), I heard the call of my parents from the world below. It was time to descend the ladder and bid farewell to the new world.  As I crept near the opening from which I came, it occurred to me exactly how high up I was. The task ahead required me to turn and go down the ladder. Thanks to my sensory problem, this seemingly simple action became my equivalent of bungy jumping off the empire state building into a pit of blood-thirsty wolves. 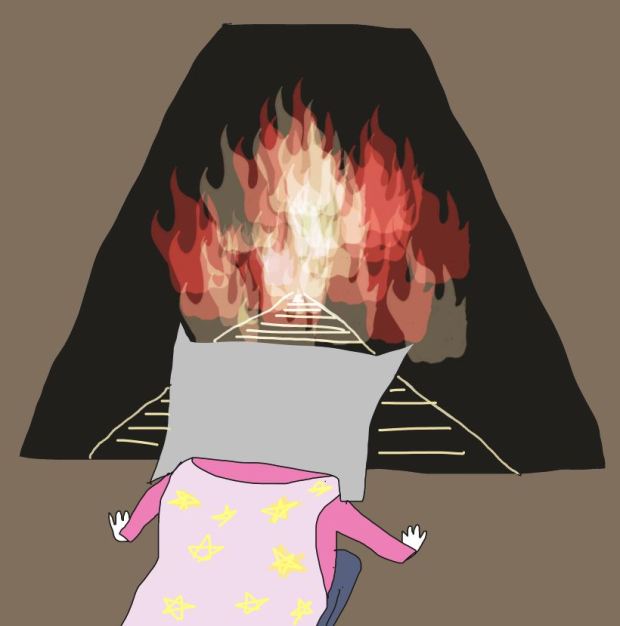 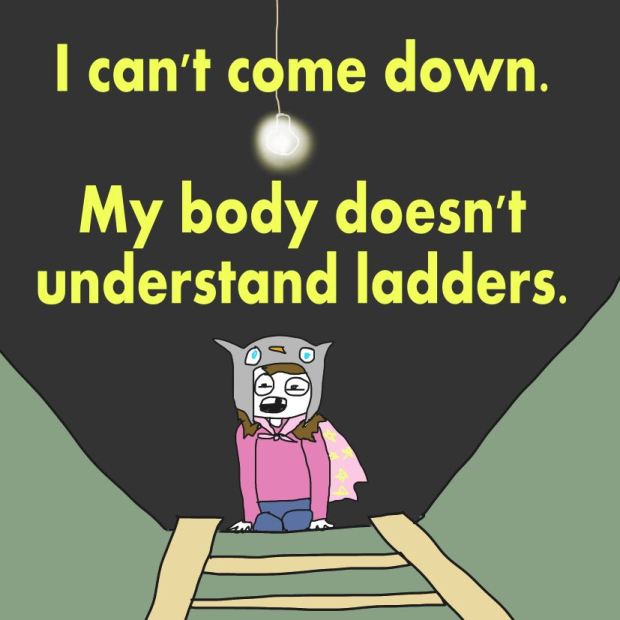 With this revelation began a true anxiety meltdown in the four foot high space on the attic. No amount of coaxing or words of reassurance from my family below were alleviating my overwhelming panic. The prospect of having to go backwards down the ladder was truly disturbing and frightening to me. As an adult looking back on the situation, I agree with my childhood self for getting upset. This was a totally rational situation to meltdown over.

It was during mid-crisis in the attic when I realized that the attic was a slightly creepy place to be. Looking around, it became clear to me that there was plenty of potential for evil creatures to jump out of the darkness and swallow me whole. Above me, giant nails protruded through the ceiling, as if a monster was clawing at the house trying to get me. (I later realized these were nails which held the shingles in place.) But things got worse. The beams supporting the roof were covered in some sort of gross, sticky brown substance. A Christmas tree loomed in the corner, ready to attack me with holiday cheer. An old toy doll …well, let’s just say she was the new bride of Chuckie.

I wrapped my blanket, Star, around my head like a veil. It was my only ally and source of protection in this strange and dangerous land. 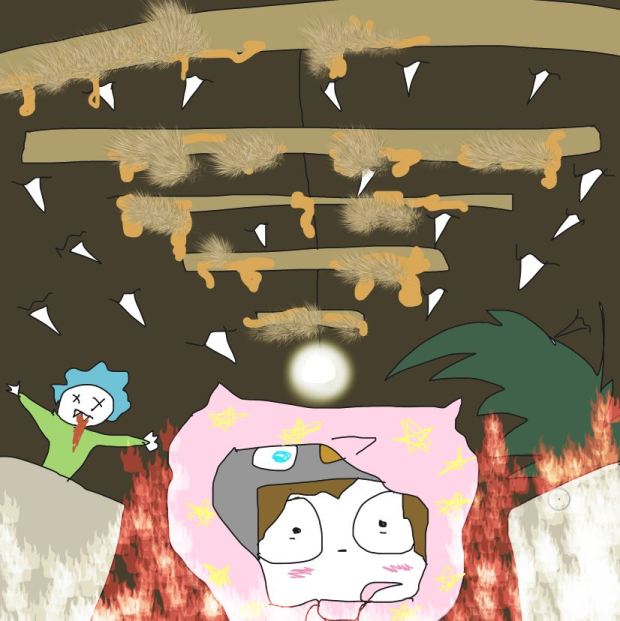 The minutes passed as my family failed to convince me to climb back down the ladder. I became a incoherent blob. As far as I was concerned, I was never coming down. This would be where I’d spend the rest of my sorry little life. My fate hit me like a ton of bricks. 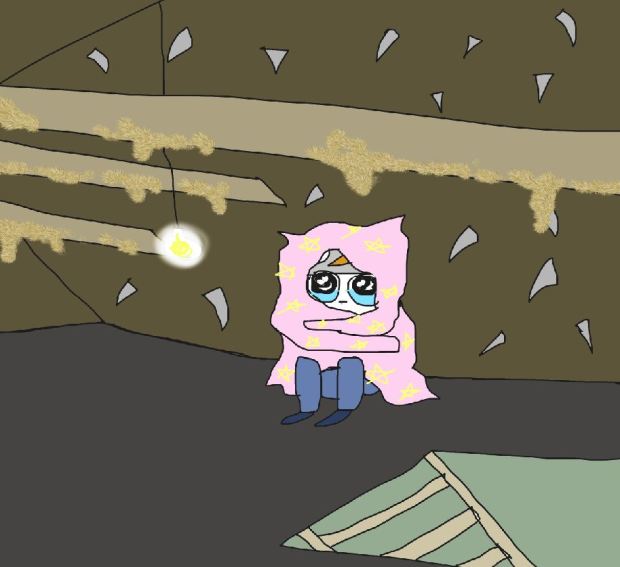 Suddenly, Dad appeared at the top of the ladder. Again, I assured him I would not be making the descent back to the mortal world. He managed to convince me to hold onto him and close my eyes. He held me and climbed down the ladder; it was the scariest 3 seconds of my young life. I felt like Carol Anne as she was sucked away from the demons of the underworld in that movie, Poltergeist. I can’t believe we made it down alive. To be able to live among my earth family yet again was such a relief. 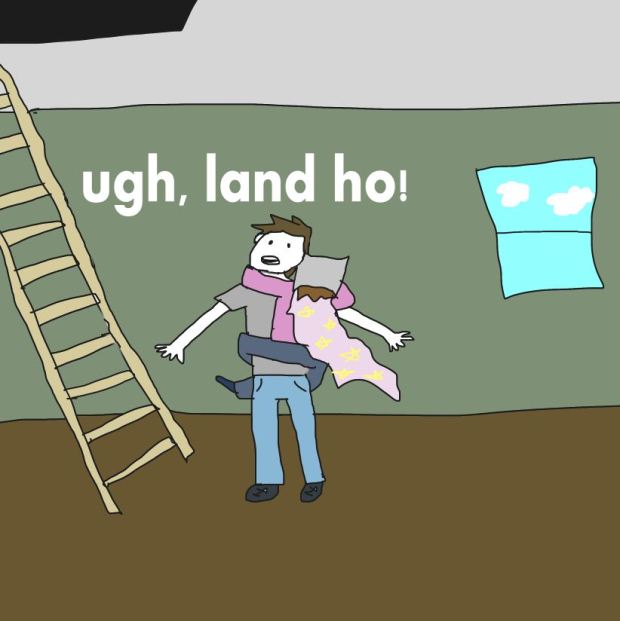 To this day, climbing any kind of ladder disorients my body and mind. The fear takes me back to that fated day in the attic. Will I ever be able to conquer this body-ladder coordination conundrum? Only time will tell. 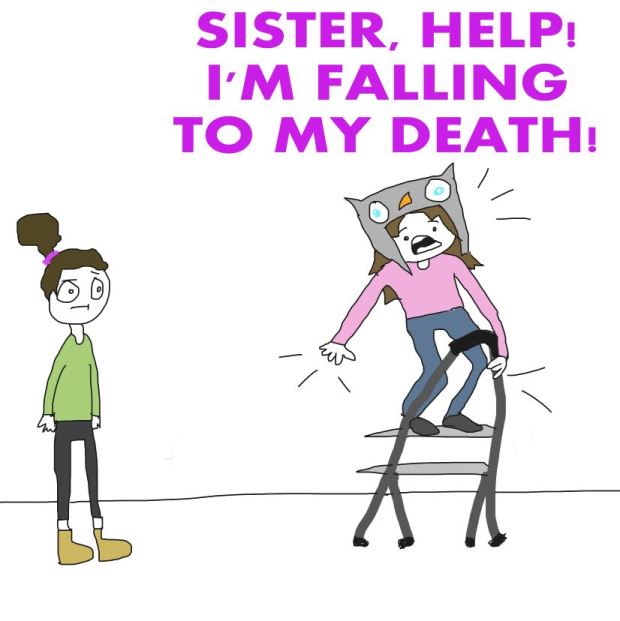 Also, F.U. to my sensory problems. Struggling to stand on a basic 2-step ladder is super embarrassing and mildly inconvenient.

Leave a Reply to 1 Nothing Please Cancel reply