Last summer, Momsy and I attended an Arts and Crafts Fair. After bopping around from one crafter to the next, we needed a bathroom pit stop. Luckily for us, there were actual bathrooms at this fair – not a porta potty in sight. Unfortunately for me, those bathrooms were very noisy, and included my least favorite thing ever: air-powered hand dryers.

At the bathroom building, I informed Momsy that I did not, in fact, have to pee. 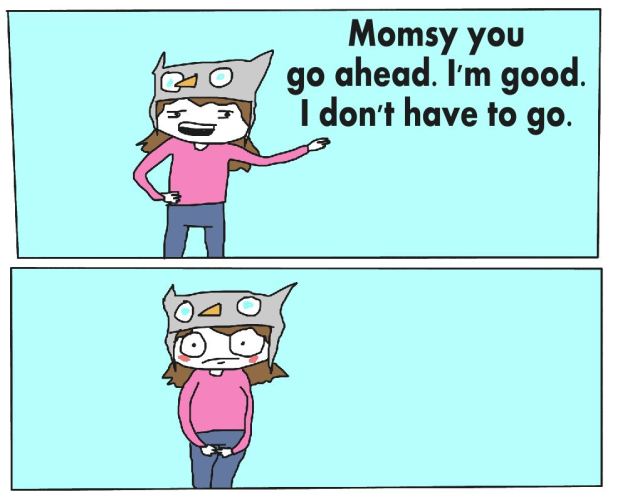 Was my bladder going to explode if the internal pressure was not released at that very moment? Probs not. But there was no way I was going into the noisy restroom.

I waited patiently outside for Momsy, watching women join the long line for the restrooms, then watching them exit after several minutes. The roar of the hand dryers, women talking, and the toilets flushing collided with the quieter sounds of the world outside as I stood baking in the bright sun, like a cookie.

Walking past me came a woman pushing another woman in a wheelchair. The woman in the wheelchair was missing her one leg below her knee. The pair were heading towards the restroom line.

Suddenly, a young volunteer working at the fair asked the woman, “are you headed to the bathrooms?”

The woman in the wheelchair replied, “yes.”

The volunteer said, “oh, come this way, this the employee bathroom, but you can use it.”

The two women thanked her casually and followed her past a security gate and into another small building.

That moment resonated with me. The woman in the wheelchair was clearly disabled – anyone could see both the wheelchair and the fact that half her leg was not there. The volunteer did the right thing by trying to make life easier for her by accommodating her needs and allowing her to use a separate, less crowded bathroom.

I began to imagine if I had asked that same volunteer if I could also use the private bathroom. I envisioned myself explaining – in my awkward-while-trying-to-be-confident manner –  about my sensory processing disorder, and how the normal bathrooms were very uncomfortable – in this case, impossible – for me to use.

I could see her making that “ehhh” face, the one where she isn’t buying it, but she doesn’t want to look like an absolute idiot either. She responds with something along the lines of “well, you see, that bathroom is for employees only. I’m sorry but I don’t really work here. I’m just a volunteer, and I don’t think it would be allowed.” 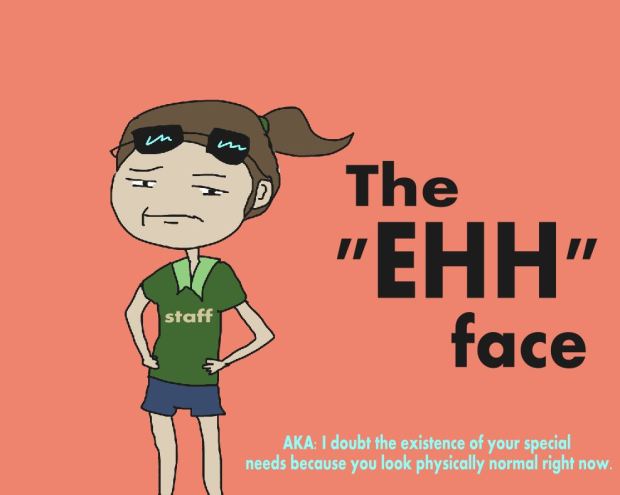 If I was a true badass of disability equality and advocacy, I might say something along the lines of, “But I noticed you allowed that other disabled woman to use that restroom. I was hoping I could also be accommodated because of my special needs.”

Next, perhaps, she would create some kind of excuse for her decision, like “I allowed that woman to use the other restroom because her wheelchair would be too big for the regular restroom.”

Or “I didn’t want her to have to wait on the long line.”

Or maybe even, “She is in a wheelchair so she has a disability. You are clearly a fully-functioning person because I cannot see any visible sign of a problem. So you cannot use the other bathroom because you are a liar and you are trying to mooch the system. SHAME….SHAAAAAAMMEE.”

Was there a small chance that this volunteer would allow me to use the private restroom after I politely explained my situation? Of course. But that small chance was probably very, very small. And for some reason, I would end up feeling guilty asking for this accommodation in the first place.

The whole moment made me think about every person with an invisible illness or disability or condition. Our lives are spent trying to make the best of a world that doesn’t seem too eager to accommodate our particular needs. Whether those needs are closer parking spaces, equal treatment in school or at work, or the need to use a different restroom when one is available.

As a teenager, I used to wear brightly colored earplugs to visually remind those around me about my condition (aside from using them for hearing protection, too). Without them, I’m certain most people would have completely forgotten about my severe sensitivity to sound and things would have been more miserable then they already were. I used to jokingly tell Momsy that I wished I was in a wheelchair because maybe then people would respect and understand my needs once they saw a visual sign of a problem. How sad is that?

Would it be tacky of me to walk around with a massive sign drapped over my shoulders, reading: PERSON WITH NEUROLOGICAL CONDITION. MAY REQUIRE SPECIAL SERVICES? 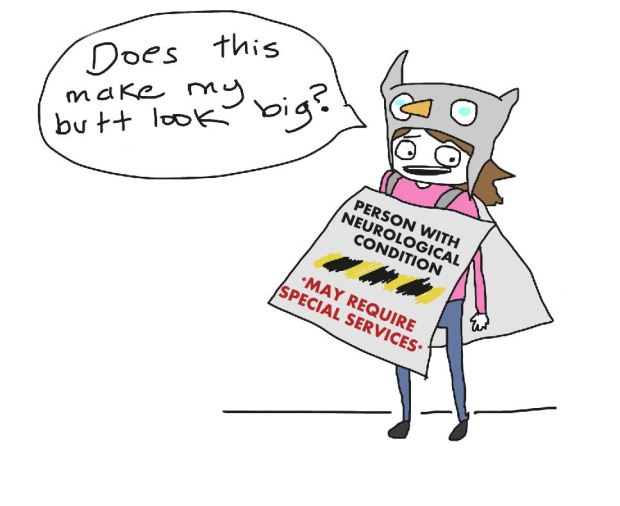 I wish I didn’t have to feel that way, but that’s how much of our society thinks of differently-abled people, and that’s how desperate I am to make things easier.

As we left the arts and crafts fair that day, Momsy and I talked about it. I said, “What if a mother and her young, autistic son asked to use separate bathroom and were turned down, even after the mother explained her situation?” Momsy replied, “They would’ve had to use the regular restroom and the boy would’ve been very upset in there, and the mother would be frustrated and tired.”

I mumbled something like, “that’s not fair. Life sucks. Can we get ice cream?” 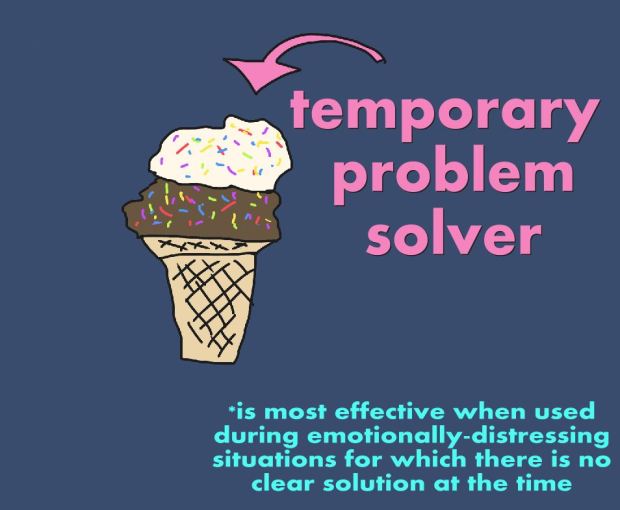 And so we got ice cream, and I peed when we got home (in case you were concerned).