Somewhere in the woods behind my house lives an entire pack of coyotes. I know this because every now and then, they will all begin to shriek and yelp together for a minute or two. The sound of it is rather disturbing, and it usually happens in the middle of the night.

One night, I woke to the sound of the coyotes howling, except this time, they were louder than ever before. In fact, they sounded as if they were right outside my house. They went on forever, until suddenly, I saw a light flick on outside my window. Instantly, the entire pack was silenced. The light remained on for another minute, then went off. No more sounds were heard for the rest of the night.

The next morning I jumped out of bed eagerly (which is not normal for me, because getting out of bed is my most hated activity). I ran to my sister in the room next to mine, hoping she too heard the commotion last night. 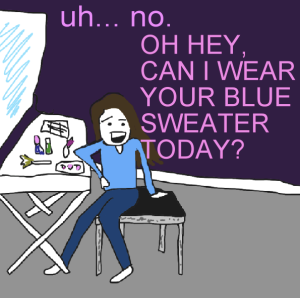 Next, I quickly searched for Momsy. Surely she must have heard the wild noises in the night! She hears everything. 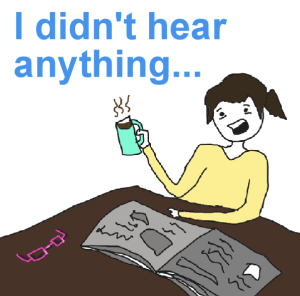 On the brink of completely losing it, I texted my dad.

(Yes, I  still have one of those awesomesauce flip phones with a keyboard, built in 2007 or something.)

When I got Dad’s reply, I was overjoyed! DAD HEARD THEM TOO.

Then he sent another text: 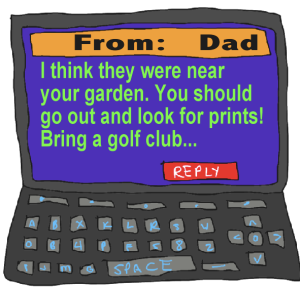 What a fantastical idea!

I was already wearing my striped pajamas, so I quickly threw on some heavy duty neon teal socks, then my boots, my poofy coat, a polka dot scarf, old blue mittens, and of course, my owl hat. I contemplated putting some sort of helmet on my head, either a metal pot or pasta strainer, but I opted out and risked head injury. The wilderness called me, and I was prepared.

I stepped outside into the cool morning and marched through the snow towards my garden. I peeked around like a ninja and scanned the trees and snow banks, looking for evidence of the wild dogs. It was quiet and still. The trees loomed over my head, watching me.

I  hunted for tracks in the snow, or anything to give me a clue! Suddenly, I spotted some faint tracks and a brown blob just ahead of me. 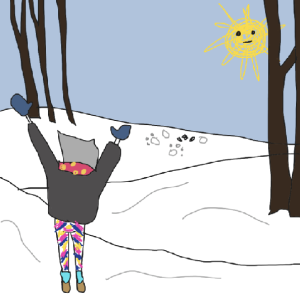 To my frustration, it was just the paw prints and old turd of my dog Sam.

Sam was outside on the deck, glaring at me. He poked his pudgy face through the deck railings.

After the incident of false hope, it was then that I noticed that I had forgotten to grab a golf club for protection. Instantly, I was vulnerable; a snack waiting to be devoured. I tried to imagine the scenario if the coyotes appeared. It went two ways:

Option 1, I beg for mercy and convince the coyotes that I am not worth their efforts because I would be a pointless snack.

Option 2, I summon my inner wilderness warrior and become the leader of the pack.

After a while of searching, there was no sign of the pack of coyotes anywhere. I returned inside, a TREMENDOUSLY disappointed.

I texted my dad, and told him I found zero evidence. I also casually mentioned that I went out there without any weapons. I told him I was a warrior of nature, essentially.

This was our actual conversation, I copied it directly from my phone:

At the end of the day, it was only my dad and I that heard the coyotes. We have yet to purchase night vision goggles, as they are more expensive than either of us realized. Still, my quest to track down the coyotes will never cease. When I hear their calls in the darkness, I stealthily peer out the corner of my window and hope to catch a glimpse of the scruffy dogs of the wild.

Are YOU a wilderness warrior? Have you had an extreme run-in with nature?! Comment below and join me in my quest to become keeper of the wilderness! Together, we can save the animals.

In all Disney movies, the “Disney princess” faces various, complicated obstacles. However, I cannot think of a single princess that has faced a real-life disability or disease. Then I thought, what if Disney Princesses had Sensory Processing Disorder? What if they were on the autistic spectrum?

The following is my prediction of what Disney princesses (and their stories) would be like if they had SPD/ASD.

(Also, for the first time ever, I did not draw any original illustrations for this post. Instead, I added my own bits to Disney pictures. I hope you enjoy it anyway.)

Ok, I’m skipping right to the part in the story where Cinderella goes to the Ball. Logically, if Cinderella had sensory issues, this would never work. Sure she could give it a good effort, but in the end, a meltdown is likely to ensue. No sensory sensitive princess leaves untouched after a large royal gathering.

We all know how that ends.

The most glaring problem here is the fact that Belle is in a relationship with an unstable beast. Belle would find herself overstimulated, unsupported and for lack of a better word, really turned-off by the beast’s intense personality.

Additionally, there is ABSOLUTELY NO WAY that Belle could have soared around the library on that freaking bookshelf ladder.

While she does live in the peacefulness of nature, Pocahontas would most likely not be flinging herself over waterfalls and just around the river bend. Hello! This is too much to ask of any sensory sensitive princess’s motor skills.

Not to mention, she has to deal with a bunch of gun-wielding maniacs who want to destroy the Earth and Grandmother Willow. Talk about stress! Better hope a girl’s got some sensory tools in that longhouse of hers.

I’m still adjusting to my shoulder length hair after years of having short hair. Of course, Merida and Rapunzel may find their excessive hair very soothing, but to imagine having the hair of either of these ladies is beyond my comprehension. The only exception would be that scene where Rapunzel wraps herself tightly in her hair after rolling down a hill. She’s got her own personal deep pressure device. 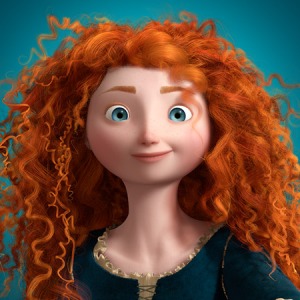 When I look at Jasmine, the first thing that pops into my mind are those ginormous earrings. Alright, so she’s royalty and gold earrings are traditional attire for your basic princess, still, Jasmine appears to have two heavy triangular-shaped fruits hanging by her face, smacking into her whenever she turns her head too quickly. The sensation of those ALONE would be enough to make any princess lose it. 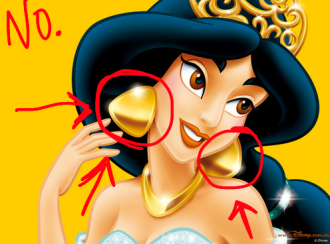 Jasmine is lucky however, because she has a large tiger friend to provide her with lots of sensory tactile relief. I need a large animal to squish me and stuff.

I’ll admit that I’m kinda biased here because Mulan is my most favorite Disney Princess. Not only did she sneak her way into the Chinese military, but she defeated the vicious Huns and saved an entire country with some uncoordinated soldiers, the Eddie Murphy dragon, and a cricket. 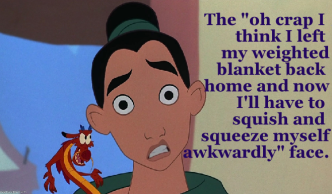 If Mulan had sensory issues, China would have been overtaken by the Huns and everything would be terrible. Yes I said it.  She’s trying to save an entire country – I’m certain she would have no time to take sensory breaks. Even if she survived the military training, I do not think her sensory stamina would hold out for that entire duration. I’m talking about that scene where she shoots the rocket into the mountain and causes an avalanche, miraculously survives, and then goes to the city to fight the Huns with her gang of loonies. AND WINS.

The Emperor’s chaotic celebration ALONE would be a solid nope.

Technically Dory is not a princess. She is a blue fish who helped Marlin find his son. I’m including her in my list because, from my observations, Dory might have sensory/autism issues. We know that Dory has complications with short term memory, but aside from that, she’s got quirks much like those with sensory problems or autism.

Although she is friendly, she struggles with social situations, including lack of awareness of danger. Dory enjoys things like talking to whales and bouncing off jelly fish. I can only conclude Dory is a sensory-seeker. She is very sensitive, as she spends much of her time comforting others and generally being optimistic about the state of things even if the world looks bleak. She is a curious adventurer, and despite her peculiar behavior, Nemo would never have been found without Dory’s help. Perhaps things would have gone a bit smoother if Dory had brushed her fins with a sensory brush that morning.

Unlike our favorite fish Dory, I imagine Elsa is a sensory-avoider. I almost hate to include Elsa because she has become the “celebrity” Disney princess. She has made this list, however, because Elsa displays the closest thing to what a princess would be like if she had SPD/ASD.

Although Elsa has learned to control her ice powers, her behavior and life has been drastically shaped by her condition. The same thing can be said for those of us impacted by SPD/ASD.

Elsa’s parents responded to the difficulty of their child by locking her in her room. Obviously, this was never a good idea. Elsa grew isolated and depressed.

After having a meltdown in front of basically the entire town, she ran away into the snowy mountains and built herself a fortress of ice. In the sensory world, this would be similar to you coming home after an overstimulating trip to Target and building a couch fort with blankets and pillows, and trapping yourself in the safety of the sensory-controlled space surrounded by all your favorite fidgets. 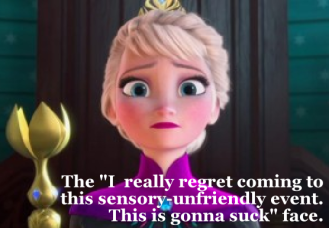 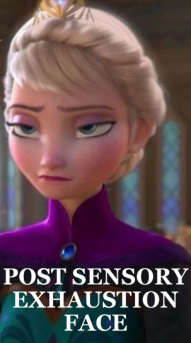 It is only until Elsa learns how to channel and manage her ice powers does her life improve. She becomes Queen, sends the bad guys home, and restores order to Arendelle. Similarly, when those of us with SPD/ASD learn to manage our various issues, we could become royals, defeat bad guys, and restore order to an entire Kingdom.

Or, we could just manage basic life skills and that would be a big freakin’ achievement too.

I may not be a Disney princess, and neither may you, but I like to dream that one day Disney will create an animated film about a princess (or prince!) with Sensory Processing Disorder or Autism. Not only will this character be most awesomesauce in every possible way, but the film will accurately portray the reality of these disorders. It will surpass Frozen and The Lion King in profits, and become the most beloved Disney film of all time ever in the history of mankind. No, my expectations are not too high. DISNEY CAN MAKE IT HAPPEN.

There you have it.

Are you (or your child) a wannabe Disney hero with SPD/ASD or something else? Tell to me in the comments and maybe Disney will see it and make a film about you.