A few months ago, I was cutting some mat board to put with a framed drawing. Tragically, I lost my grip on the mat knife and accidentally sliced my left index finger.  I grabbed my finger tightly and ran to the bathroom where, luckily for me, Momsy was there to assist me with my new wound.

The minute I released my hand on my finger, blood began to pour. It was like a horror movie, (if that horror movie was about Momsy and I standing in the bathroom, and I was just saying “ow, ow, ow”). TERRIFYING.

We wrapped it up quickly as a dull throb slowly began to overtake my whole hand. I’m lucky to be alive, honestly. 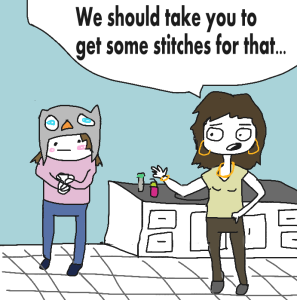 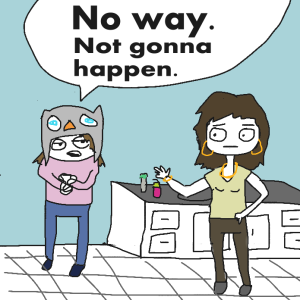 After a while, we re-wrapped the large cut with proper bandages and gauze. It wasn’t until this moment that I realized the doom which I now faced.

The new bandage monstrosity on my tiny finger was a huge sensory turnoff. I mean, HUGE.

I couldn’t for the life of me stop sensing the bandages on my finger. It wasn’t the pain, which was slightly annoying, rather, the heap of gauze, tape, and other junk piled onto my finger tip was like an assault on my entire sensory system. I’m not kidding you when I say that the illustration below displays the actual bandage to finger ratio:

Two days passed and still, the bandage predicament consumed my thoughts and will to live. My family informed me that I have been walking around the entire time with my finger stuck out awkwardly. Humiliated and moody, I told them that I had no idea that I was doing that, and further, I couldn’t seem to control it. I’d try to push it down into normal finger position, but it would pop right back up like a jack-in-the-box. 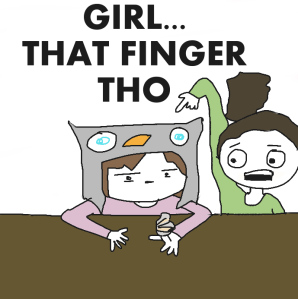 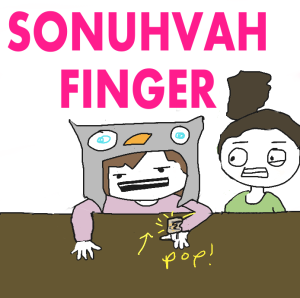 A week passed, and still my ugly finger wound was relentless in its quest to destroy me via sensory tactile WARFARE.

As a child, I had similar reactions to things like denim, tags in clothing, or socks that became awkwardly bunched in my shoe. I referred to the sock problem as a “coo-eee.” All were the cause of extreme distress. Parents with sensory kids, I know you feel me right now.

As an adult, I’ve managed to conquer the denim thing, but the same cannot be said for the clothing tags and sock cooees. Sensory adults, I know you feel me right now.

The giant band-aid was merely the tip of the iceberg, so to speak. If I was having a bad sensory day, my band-aid finger was sure to put me over the edge.

Thankfully, because the world is merciful, I was upgraded to a single band-aid after two weeks. I saw the light at the end of the tunnel. Perhaps there was hope after all!

One morning, that glorious day had arrived where I needed no band-aid whatsoever. My finger was free! And so was I.

All that remains now is a scar on my finger tip – the memory of a harrowing three-week period of sensory insanity. I will never again underestimate the mental anguish that a bandage can cause. More importantly, my finger returned to its resting position, and life went on. My tiny scar and I became very close.

I’m unsure if this comparison exists already, but seeing as Tina Belcher from Bob’s Burgers and Lumpy Space Princess (LSP) from Adventure Time are two of my most beloved television characters of all time, I thought I would go ahead and make a blerg post about them. These two characters represent the epitome of the phrase, “always be true to yourself.” Through this comparison, I hope it becomes clear that they are fantastic models for morality, honesty, and integrity.

This is Tina Belcher: 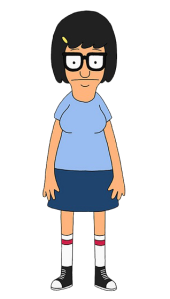 She is the eldest daughter of Bob and Linda Belcher, and sister to Gene and Louise. Her family owns a restaurant, Bob’s Burgers.

This is Lumpy Space Princesss, more commonly known as, LSP: 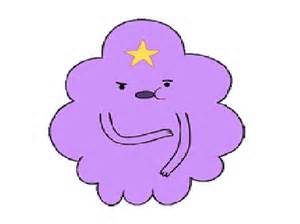 LSP presumably lives in Lumpy Space with her parents. Although, she often runs away and spends time wandering all over the Land of Ooo (the main setting in Adventure Time).

Tina loves boys, zombies, and unicorns; not always in that order.

(I love the swagger of zombies too, Tina. Me too.)

Tina’s most highly-prized boy is a young lad named Jimmy Junior, a fellow student at Wagstaff School. Although Tina is religiously devoted to Jimmy, she is especially dedicated to his butt. 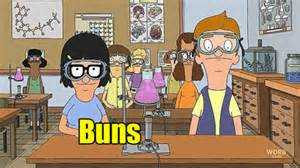 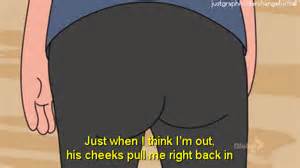 Sadly for Tina, Jimmy is not as enthusiastic towards romance as she would like. Still, her fixation on him (and his butt cheeks) remains strong.

Boys, zombies, and unicorns all converge in Tina’s fan fiction  – a notebook filled with her fantasy musings.

Much like Tina, LSP dedicates her time to hunting down “hot guys” to date and potentially marry. Unlike Tina, LSP’s priorities are unrealistically high. 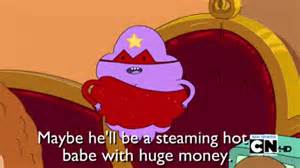 Back in Lumpy Space, LSP does everything she can to gain independence from her parents, including living out in the wilderness with a can of beans, and joining a pack of wolves.

Like Tina, LSP enjoys writing and dreams of an exciting career as a famous novelist.

LSP’s biggest trait is her obsession with, well, herself. She has no filter, and is well-aware of her best features. There is no shame here, folks. 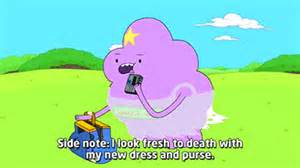 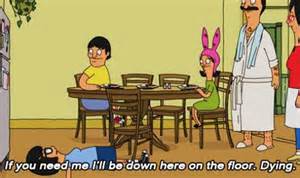 They know what to say to make things right:

Tina and LSP are fluent in the language of sass. This takes years of experience, persistence, and a ruthless mentality. 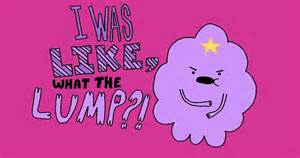 Be True to Yourself

Above all, Tina and LSP both possess the ability to remain true to who they are; individuality is of the utmost importance.

(note about images: with the exception of the first image before the title of this post, the rest of the images featured are not mine. They’re mostly screenshots from the two featured tv shows, and a few I’ve found using google. I’ve given credit to the images when I’ve found the source. If you happen to know the source of the uncredited images, please let me know in the comments, thanks!)

Attention sensory human beans of the earth, and beyond: 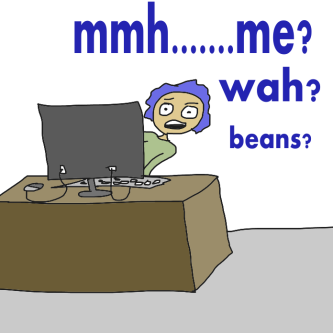 I have discovered the internet meme, Sensory Sea Turtle via the appropriately named tumblr blog, fyeahsensoryseaturtle.tumblr.com

The joy and delight I feel over this discovery is past the realm of comprehension. 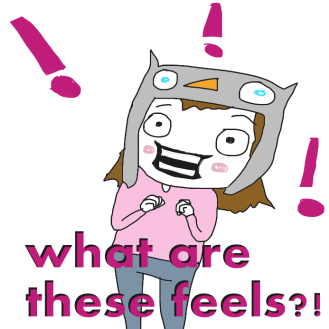 The internet community, in all its glory, created a meme specifically for Sensory Processing Disorder. What an honor, really.

The following 14 Sensory Sea Turtle memes are from the blog above, fyeahsensoryseaturtle, aka, they are not mine and I did not create them. (WARNING: some of the memes contain bad language) 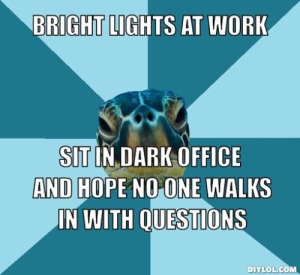 3. ain’t playin’ no games! (also, please ignore the misspelled word in this one. Have mercy on its creator, somewhere out there, someone doesn’t know the lose/loose difference). 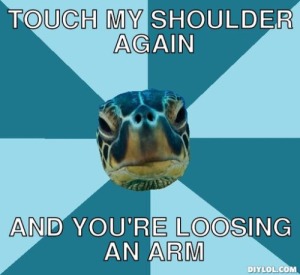 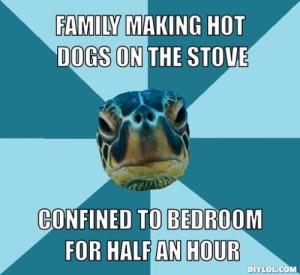 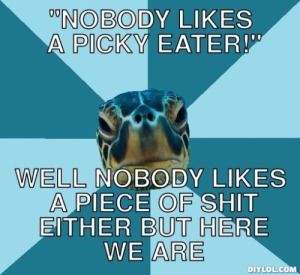 6. went to a movie!? WHAT ARE YOU, SPD SUPERMAN? sheesh

8. while in a room full of successful, fully-functioning, neurotypical human beans…

9. time to get new frenz I suppose

10.  story of my entire college experience….

13. in the midst of a nightmare 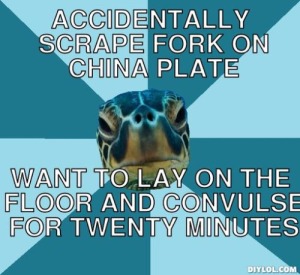 See? Sensory Sea Turtle is just like you and me. (Except he’s a turtle, and he’s also a product of the internet, and he doesn’t exist in real life.)

Sensory friends, let us make Sensory Sea Turtle our international mascot. He is the face of our mission (our mission to do stuff, and things…). He is the uniting force that brings us together in times of despair.

Thank you, Sensory Sea Turtle. Thank you. May you never get suffocated by oceanic trash. We love you.

The following blerg post is short writing piece I sent to The Mighty, a website that publishes short stories that empower the human spirit, specifically, human spirits with various disabilities or special needs. Anyone can send a story to this website, so I spent quite a while writing this little number below, as well as created two illustrations to go along with it. After all, who would I be if I didn’t include an awkward illustration in my blerg posts?

To my dismay, I received an email stating that this was not going to be published on their website, but they would be happy to receive other/different stories from me in the future.

Still, I wrote from the recesses of my shoul (yes, my shoul); I spent a lot of time working on this, and it would be wrong to keep it to myself knowing that someone out there might benefit from my words.

So I’m sharing it with you, dear reader:

The Things I Need

I am someone who has lived with a neurological condition my entire life. At the ripe old age of twenty-four, it has become clear to me what I need from those around me, and more importantly, what I don’t need.

I have learned that people are generally very uncomfortable and rather ignorant when it comes to interaction with those of us who are dealing with any sort of brain dysfunction. Whether it be mental health problems, or autism, or epilepsy – the gray mushy blob in our skulls causes us to experience numerous struggles to which people often don’t know how to react.

This lack of awareness in the world has caused me to place a high value on the few people in my life who have shown a great depth of understanding for my unique challenges. These people are my gold. It wasn’t until recently that I wondered as to why I prized these people the way I did. My thoughts traveled to the idea that, as a person with a disability, I need certain things from people around me. But these things weren’t really things, they were intangible; they were tiny, unforgettable moments of compassion and empathy.

They were things I needed to feel.

A question arose in my mind. How I don’t want people to make me feel? 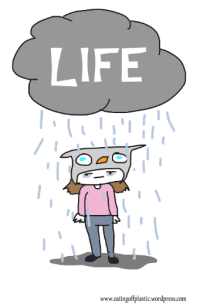 Those are the things I don’t need.

So the question then became, how do I want people to make me feel?

I need someone to say to me, “Damn, this sucks. Let’s lay on the couch today and just talk and eat cupcakes.” I need medical professionals to treat me like a person, and not a number. I need honesty, laughter, and equal amounts optimism and pessimism (for when I don’t want to pretend to be happy and positive for five minutes, please). I need someone to hug me for no reason – and I mean, a real hug, not one of those crummy-half-pat-on-the-back-for-two-seconds hugs.

As one of my most beloved writers, Maya Angelou, stated, “At the end of the day, people won’t remember what you said or did, they will remember how you made them feel.”