The following post strays from the theme of my usual posts, but I know you’ll read it anyway…especially if you love animals. If you don’t, well, what the heck is wrong with you?

This is my dog Sam:

Sam is an 11 year-old shih-tzu/cavalier mix, and due to several unfortunate circumstances, he has lost several body parts over the years. Most notably, his left eye. (Yes, he is the perfect pirate doggy.)

Sam is also missing a toe, and a salivary gland. He’s covered in an alarming amount of moles and warts, but luckily he’s very furry. His one leg is crooked, and has been for a long time. According to the vet, nothing is wrong with it.

However, my dog’s bizarre list of physical flaws can not compare to his glowing personality.

I am not ashamed to say that my dog is a self-serving, stubborn, morally corrupt, annoying creature. From the start, Sam has never loved me. He simply uses me for his own personal gains.

Taking him for walks consists of being pulled around mercilessly. If I want to change direction, I have to take a battle stance and face off until he gives into my will. But usually, he drags me to wherever he desires, with no consideration for my life.

If he’s not on a leash, I have to watch him or else he’ll take advantage of the invisible boundaries which have been established over his 11 years of life. He clearly knows what they are, yet he doesn’t give a flying crap about them. 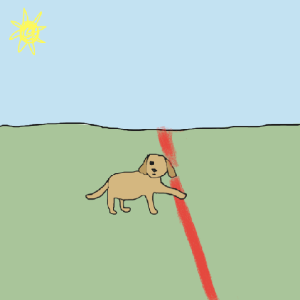 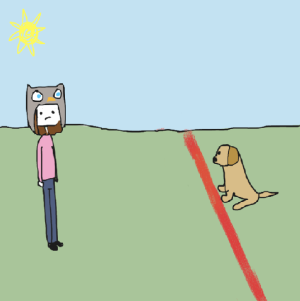 I am the person who gives Sam a bath. Sam smells similar to a frito – like the chip – but one that you would absolutely never eat. During the bath, he will slowly try to make his way just out of my reach, as if I don’t see him leaving. I spend the majority of my time pulling him back. He applies a variety of methods to get away from me. 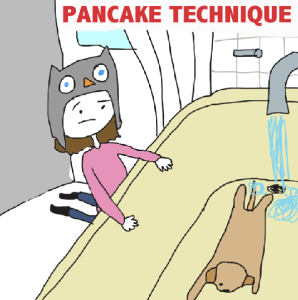 After I scrub the frito out of him, I have to dry him. While he’ll willingly sit on a small bench, he does not like the hair dryer for long periods of time. He resorts to a desperate crotch escape:

Sam’s biggest peeve is food. Sam is perhaps the only dog you will ever meet who turns away from freshly cooked steak. Every meal for Sam is a chore for the rest of us, as he refuses to eat even the most extravagantly prepared dishes.

Eventually, after shoving a piece of food into his mouth, he realizes that he has to eat – to, you know, survive – and finally, he eats. Slowly.

While I am Sam’s least favorite member of the family, he’ll willingly grace me with his presence from time to time. Again, these moments are only meant to serve or satisfy him in some way, like when he’s trying to get a better view of the television.

One of his favorite things to do is to slap my door with his paw as if to knock before entering. I’ll open the door to let him in, but he quickly wants to go back out. And so on, and so on.

*REPEAT FOR 3 HOURS OR UNTIL SANITY IS LOST*

Other times, he’ll hang out with me in my bedroom or in my art room while I paint. I get fooled into believing that he’s suddenly taken a liking to me. I should know better. As many dog owners know, when a dog comes and goes quickly from a room, it is for one reason.

The poisonous gases released from the bowels of my dog are so putrid, I feel as though I am drowning in liquid death. Is my dog trying to end my life? YOU DECIDE:

Sam also isn’t the brightest pup around, although he does put forth a valiant effort to guard his precious property. Regrettably, anything on his left side goes unseen – literally, due to lack of eye.

Here is an actual picture of Sam staring at walls, one of his more common activities:

Here is an actual picture of Sam selfishly eyeing our birthday cake. Yes, you heard that right, “our cake,” as in, we have the same freakin’ birthday:

Here’s an actual picture of Sam sitting smugly on a mattress, knowing that while the sheets are being washed, his stinkiness will penetrate the mattress fibers permanently.

Amazingly, on a rare occasion, Sam does reach out to me to express his gratitude and love. Considering the fact that I shower him with affection and care 24/7, it’s nice to receive it back. I mean, he is pretty adorable. 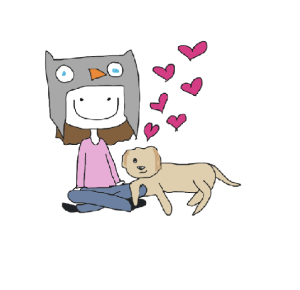 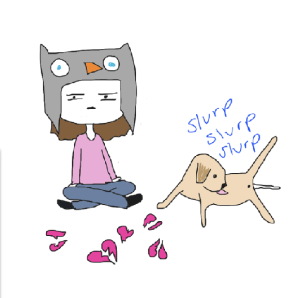 I hope, dear reader, that your animal friend loves you unconditionally. Unless, of course, you’ve got a dog like Sam.