Before you dive in, a quick note. This article was written for the STAR Institute for SPD for Sensory Awareness Month 2017. Sensory anxiety is a topic near and dear to my heart. After it was published, I heard from so many people around the world about how this particular article had really moved them. I was so grateful. I am finally publishing it here on my blog, where it will live forever and evah.

Let’s talk about something that nearly every single person with sensory issues has to deal with: ANXIETY.  Gosh! Even the word itself sets me on edge.

For people with Sensory Processing Disorder, anxiety comes as part of the package. It’s the bonus prize that nobody wants.

SPD and Anxiety work together to cause mayhem. They play off each other, and create a spiral effect of symptoms.

Strangely, when we talk about sensory problems, anxiety is rarely part of that conversation. The focus is always on the sensory part of SPD. But I would like to shed some light on the chaos that anxiety can cause when it’s teamed up with SPD, and why it’s different than non-sensory anxiety.

But first, it’s time for a little story. A short tale of my own experience with sensory anxiety to set the stage. The following is the true and slightly uncomfortable reality of my life:

I’ve always been told that the best –  and perhaps only – way to conquer anxiety is to put myself into situations that make me anxious, and to push through it.

I’ve done this for years.

I’ve done this most recently through college, where every morning before my commute to school, I had to give myself extra time because of anxiety-induced diarrhea and nausea. My agonizing stomach cramps and bathroom visit occurred daily, without fail. (I told you this was going to be an uncomfortable story.) I couldn’t stomach food for hours. But, only on the days when I had school. There are no such things as coincidences in this sensory life.

Once I made it to school, I often had to give myself even more time to find a bathroom and change my shirt, which would’ve been soaked in sweat before my first class even began. I spent the large part of my day feeling enormously dizzy. My face hurt from a clenched jaw and the muscles in my back were sore from tension.

Often, I bought myself a warm drink in an attempt to soothe my trembling body, which was trembling on account of being both anxious and also cold. (Fact: when the body is anxious, blood rushes to the main organs, leaving the extremities feeling cold and/or numb.)

I’d come home at the end of the day and nap for an unreasonable amount of time, like 6 hours. My body was depleted, from what I assumed was sensory overload. One day it occurred to me that I was not only physically and emotionally exhausted from SPD, but also from my anxiety that was caused by my SPD. Then the anxiety and SPD and feeling helpless and feeling hopeless made me seriously depressed.  Would the fun ever end? I wondered.

I went to college for four and a half years. I pushed through my debilitating anxiety every day, and wouldn’t you know it, the last day of college rolled along, and that morning I had diarrhea and a sweat-soaked shirt. Just like the first day.

I know, I know. It was a truly riveting tale. One that will certainly go down in history as one of the greatest stories known to man. But let’s get back to what matters here. Physical symptoms of anxiety are only one part of the equation.

At the end of the day, I learned that pushing through my anxiety did nothing to help alleviate it. All it did was make me miserable and feel like I was weak for not being able to get rid of my symptoms.

Since that time, I’ve come to realize that the reason traditional methods of alleviating anxiety were not working for me was because I had a very good reason to be anxious.

In my case, my SPD has gifted me with overwhelming sensory sensitivity and the inability to function when having to process multiple sensory stimuli. In most environments, like a classroom for example, my body picks up on the sounds, smells, textures, and even the vibe in the air to an outrageous extent. My sensory brain is turned up to the highest setting and it isn’t very good at turning off.

As one can imagine, having SPD is not fun. Anybody who says it is, well, they are a goober. It’s called a disorder for a reason. It’s not called Sensory Processing Fun Times All Around (SPFTAA). Although, I admit that would be a cool thing.

Dear reader who I love so very much even though I’ve never met you,

If you can relate to my gastrointestinal distress in sensory-ugly environments, please take comfort in the fact that what you are feeling both physically and emotionally is very normal. For instance, when the sound of most people’s voices are loud to the point of severe discomfort, being in a place with lots of people talking is going to give you anxiety. It makes sense.

Let’s briefly recap and take a look at the complete equation. Keep in mind, I spent a lot of time making this: 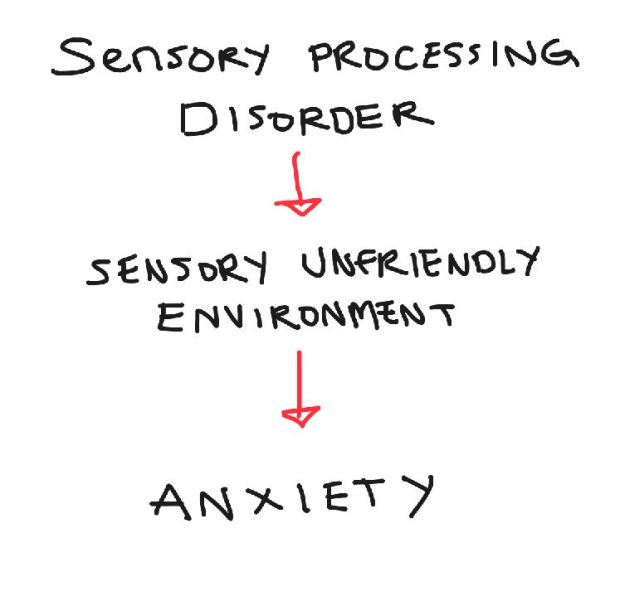 You wouldn’t say to someone, “hey, I know there’s a hungry shark in this swimming pool, and every time you’ve gone in he’s bitten you, BUT you don’t need to be anxious about swimming because if you keep going in, he won’t bite you anymore!”

Yet, we’ve been telling ourselves, “hey self, I know you have SPD, and every time you go into a sensory unfriendly environment it’s super distressing, but you don’t need to be anxious this time because if you keep pushing through it, you won’t have anxiety anymore!”

This concept of pushing through anxiety often works for regular, non-sensory anxiety. Allow me to demonstrate:

When you were five you went to a birthday party. A person waved a bunch of balloons around your face and you FREAKED OUT. Fast forward ten years later, and you have anxiety whenever you see balloons.

To alleviate this kind of anxiety, you start to spend time around balloons. Maybe you go into a room where someone has placed a balloon. Maybe next time, you move a bit closer to it. After that, you touch one. Your balloon-related anxiety slowly improves over time. You are able to push through the anxiety by addressing the irrational thoughts and fears you experience, and replacing them with rational ones. “Balloons aren’t scary. I do not need to feel anxious around them. I am ok.”

**I’d like to note that when I say regular anxiety I do not mean less anxiety. Anxiety from having a neurological condition like SPD is a different kind of anxiety, not more or less severe than anxiety from other things.**

Now let me demonstrate how this concept does not work for sensory anxiety:

When you were six you went to a birthday party. You are sound sensitive, and during the party, kids were popping balloons. It upset you deeply. Fast forward ten years later, and you have anxiety whenever you see balloons.

To alleviate this kind of anxiety, being around balloons will not reduce your anxious feelings because you are still sound sensitive, and balloons could potentially pop at any time. If they pop, it will scare you the same every time.

WHY DOES THIS HAPPEN?

The reason people with sensory problems have recurring, stubborn anxiety is because many SPD’ers lack the ability to habituate (become accustomed to) new information. Our unique sensory systems do not do well with what I refer to as POTENTIAL stimuli. We like routine and predictability. But a lot of sensory stimuli is neither of those things. The world is full of random, unusual and unpredictable things. When you have a brain that struggles to make sense of the predictable – let alone the unpredictable – it’s easy to understand why anxiety is the result.

When you have anxiety from sensory issues, it presents itself the same way non-sensory anxiety does; the symptoms are virtually the same. It can be hard to distinguish between sensory overload and anxiety. Most commonly, SPD anxiety can look like this:

However, if you notice, the symptoms of sensory anxiety are similar to symptoms of a freeze response. Unless the sensory stimulation or the anxiety reaches a breaking point, people with SPD tend to literally freeze during an anxiety crisis. The meltdown and shutdown occurs after, when they are in a safer space to let it all out. Of course, this doesn’t always happen so nicely, and sometimes you find yourself completely dissociated and about to vomit from a fire drill in the middle of the hallway at school. It’s equal parts inconvenient and embarrassing.

HOW DO I HANDLE SENSORY ANXIETY?

Consider the source! To fix or improve sensory anxiety, you have to learn what sensory-related problems give you anxiety in the first place. You don’t want to keeping jumping into the swimming pool with the shark. Remove that shark before you go swimming!

Here are some of my favorite, tried-and-true methods for relieving anxiety when it’s tied to sensory issues:

With all that in mind, I must conclude with this: experiencing anxiety from having sensory issues is normal, common, and expected. Don’t beat yourself up about it. Your brain is reacting as any brain would under the circumstances. I know somedays the anxiety can be crippling. Other days, it can seem like it’s on a permanent vacation! Flip flopping like that can be draining and confusing.

Pushing through sensory anxiety won’t work to alleviate it, but that doesn’t mean you should stop pushing the boundaries of your life as a person with sensory issues. You don’t have to go in the shark pool, but it’s probably to your advantage to go up the edge and peek in.