Ok, so maybe Harry Potter didn’t really save my mental health. He saved the ENTIRE WORLD from Lord Voldemort. All Hell broke loose at the Battle of Hogwarts, and Harry claimed victory, (even though Hermione did ALL the work but that’s not the point I’m trying to make). Since the beginning of the end, AKA middle school, the Harry Potter series has had a tremendous influence in my life.

I read the books on the school bus every morning as a distraction from the impending doom and anxiety that awaited me at my destination. 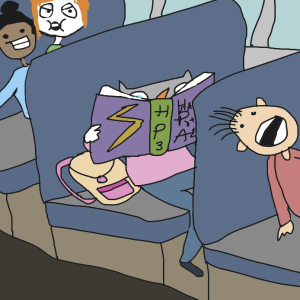 I read during study hall.

*Except for that one year, where my study hall teacher was the wife of Satan…

I read on the ride back home.

It was middle school that taught me that the majority of other people my age were severely lacking in moral fiber, rational thinking, and general intellect. These are not qualities that a young girl needs during a time of mental and emotional turmoil. My peers were alien to me, and so, I sealed myself shut within the pages of the HP books; a safe and comforting place to be.

One of the Gang

Soon, the films were created. Amazingly, I was the same age as the actors playing the main characters: Harry, Ron and Hermione. When they were eleven years of age and starting their first term at Hogwarts, I was nearly eleven myself. What a coincidence, I thought to myself, it’s like I was supposed to be at Hogwarts too.

As my neurological crap grew increasingly more devastating, I propelled myself into the world of wizardry and witchcraft. No human bodily malfunction could bring me down me, I WAS A WITCH IN TRAINING. There was bound to be some spell to alleviate all this junk happening in my life.

I clung to the ridiculous and impossible chance that I would receive my letter to Hogwarts. I fantasized about the day I would look out my window and spot a doofy owl hurling itself towards my house, a tiny white envelope clutched tightly in it’s possession. I would retrieve the letter containing my acceptance, and my life problems would simply vanish. My salvation and mental health were dependent solely upon my acceptance to Hogwarts. 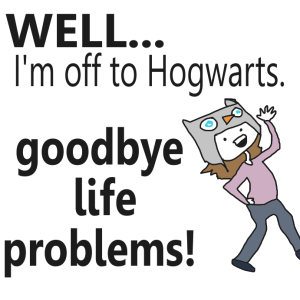 I started high school in September, trying to retain a sense of normalcy despite the fact that everything was not normal. My anxiety, depression, and sensory processing disorder reached a record high score on the “How Much Does Your Life Suck Right Now” meter. I was brought to doctors and therapists of all kinds, and in return, I received puzzled expressions or bottles of pills that made everything worse.  But I still had Harry Potter.

At the end of my freshman year I was pulled out of school because I was so ill. During that summer, I painted murals all over my walls – my own art therapy. Sprawled across one wall, monumental and extraordinary, was my rendering of Hogwarts Castle. Above it was a portrait of Harry surrounded by his name. In my little miserable world, it was breathtaking and comforting.

*Note: The mural truly looked like this. It was ginormous and super awesomesauce.

The years grudgingly went by….

The one constant in my life was Harry’s journey. During the deep, unrelenting surges of depression, anxiety, anger, and isolation, the wizarding world was my safe haven – an alternative reality. Granted, things were not super great in Harry’s world either. Lord Voldemort was trying to kill him, and he was trying to kill Lord Voldemort; it was not all butterbeer and chocolate frogs, if you know what I mean.

But the idea of it all – the story from start to finish – carried me away.

Here I am, 24 years alive, and still awaiting my Hogwarts letter. Santa bought me a fake one for Christmas a few years ago – was he seriously foolish enough to think I’d fall for that crapsauce? Would YOU fall for this?? (note: the fuzzy yellow caterpillar was not included in the original letter. I drew it there to cover my address. I don’t need internet hooligans knowing where I live). 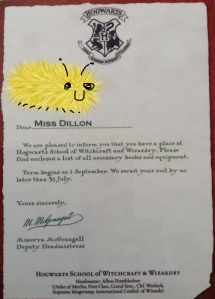 I do not want to identify myself as a muggle (non-magic folk), for that would delete my rich, inner fantasy life that keeps me afloat in moments of suffering. I am the owner of a wand – with a tip that lights up when the wand is waved. I have a Hogwarts cloak, Gryffindor scarf and hat, Harry Potter quiz book, a 200 lb Harry Potter encyclopedia of sorts, Harry Bobble head, Snape action figure, and a million more things which you don’t probably give a crap about.

By engulfing myself into the wizarding world, my numerous illnesses morph into Dementors; soul-sucking, happiness-destroying, butt-ugly creatures. Dementors cannot be killed, only kept at bay until they die from natural causes, or from crashing into the night bus.

Either way, you must use the Patronus Charm to protect yourself from the Dementor’s kiss of death (it’s as delightful as it sounds). The Patronus Charm is conjured by concentrating intensely on your happiest memory while stating the words, Expecto Patronum. Your wand should release a glowing animal figure which will defend you from the Dementors.  Expecto Patronum can be roughly translated from Latin to mean “I await a protector.”

“Ok Kelly, that’s real fascinating, but how does this all relate to depression?” -You

“GIVE ME A MINUTE, WOULD YOU? THIS IS COMPLICATED MATERIAL!” -Me

The author of Harry Potter, JK Rowling has confirmed that she created the Dementors after her own experience with depression. She stated: “Dementors are among the foulest creatures that walk this earth. They infest the darkest, filthiest places, they glory in decay and despair, they drain peace, hope, and happiness out of the air around them”.

The story of Harry Potter has given me unrelenting strength when facing situations that I was certain would be my demise. When curled into a blobby ball of emptiness, it is the thought of the antics of Fred and George that bring a stupid smile to my face. It is Hermione being a general badass. It is Ron dancing awkwardly with Professor McGonagal. It is Severus Snape, dashing around down the castle halls with his cloak billowing behind him like a majestic, dark stallion. It is Harry, doing…ugh…whatever it is that Harry does.

In conclusion, I’d like to amend my original statement to this: Harry Potter did save my mental health. Thanks, Harry…cough…cough..Hermione.